The Integrated Early Childhood Development (IECD) programme applies a holistic cross-sectoral approach which aims to bring about optimum early childhood development, and thus reduce the widening disparities in maternal and child health indicators between ethnic minorities and the Kinh majority. Nurturing care, encompassing good health, nutrition, responsive caregiving, opportunities for early stimulation and learning, as well as safety and protection, is essential for setting young children on a path towards lifelong health and well-being. Viet Nam has joined governments around the world in developing and implementing policies, programmes and services in support of nurturing care to ensure that caregivers have the tools and information they need.

Viet Nam has a population of 92.4 million of which 7.7 million are children under 5 years of age. There are 53 ethnic minority groups and one dominant ethnic group, the Kinh, which constitutes approximately 85% of the population. The Kinh mainly inhabit the lowland and delta areas, while most of the ethnic minority groups live in remote, sparsely populated northern, central and western mountainous regions.

Although considered one of the poorest countries in the world in the 1980s, Viet Nam has achieved substantial socioeconomic development and is now ranked as a lower middle-income country. Its successes include slashing the national poverty rate from 58% to 10% between 1993 and 2014. The majority of children now have access to adequate health care, and are expected to live longer than their parents; primary school attendance has reached 96%. However, these achievements conceal growing disparities between different population groups and across geographic regions: child survival, nutritional status, safety and security are all much better among the Kinh majority than for the ethnic minorities.

About one in five children, or approximately 5.5 million children experience at least two deprivations in education, health, nutrition, shelter, water and sanitation, or social inclusion. Under five mortality rate among ethnic minorities is 53 per 1000 live births against a national rate of 20%. The national stunting rate is 24,9% and about 77% of children 0 to 3 years and 13% of children 3 to 6 years do not attend any formal pre-learning programme (MICS 2014).

The traditional structure of the Vietnamese family is patriarchal. Hierarchical roles are highly valued, with fathers acting as family heads responsible for decision-making and child discipline while mothers maintain the traditional nurturing role. The extended family and the commune influence relationships, hence multigenerational interactions are common.

An innovative approach to nurturing care: the “holistic parenting model”

IECD is a comprehensive approach involving policies, service provision and programmes for children from conception to age 8 years, and for their parents/caregivers and the communes in which they live. In a Government and UNICEF collaboration, this approach is being piloted in three provinces, nine districts, 27 communes and 305 villages.

Holistic parenting, the core of IECD, emphasizes multisectoral and integrated service provision to address the essential components of nurturing care within the context of the family and the commune (see Box 1). The programme encompasses: health, nutrition, water, sanitation and basic hygiene (survival and development); early stimulation and learning opportunities during the first three years of life, a window of opportunity for impacting cognitive, physical, social and emotional development (education); responsive parenting/nurturing, including nonviolent discipline (child protection); and communication and advocacy (communication for development or C4D). There are plans to scale up the programme across all 63 provinces, making it the national approach to parenting.

With UNICEF technical support, capacity building, and a series of multisectoral consultative meetings with the Ministries of Labour and Social Services, Health, Education and Training, and Agriculture and Rural Development, the first ever national ECD scheme (2017–2025) was developed with a budget and submitted to the Prime Minister. Mapping of relevant stakeholders was successfully completed, providing opportunities to share experiences and explore possible partnerships to increase availability of nurturing care services. The Viet Nam National Council Committee for Children, led by the Prime Minister, has been established to oversee the implementation of children’s rights programming. A policy advocacy workshop with the National Assembly Committee on Culture, Education, Youth and Children and other important stakeholders successfully engaged the highest decision-making authority in advocating for the nurturing care programme. The key pillars of the state – the Communist Party, Prime Minister, Government, and the National Assembly – have thus been activated in support of integrated nurturing care services.

#EarlyMomentsMatter is a UNICEF global awareness raising campaign, implemented also in Viet Nam, to help parents/caregivers understand the scientific evidence behind early childhood development and improve nurturing care in the early years. This C4D campaign will help parents/caregivers, families and communes understand how to nurture, protect and stimulate young children, and has motivated National Assembly Committee members to champion and advocate for nurturing care. 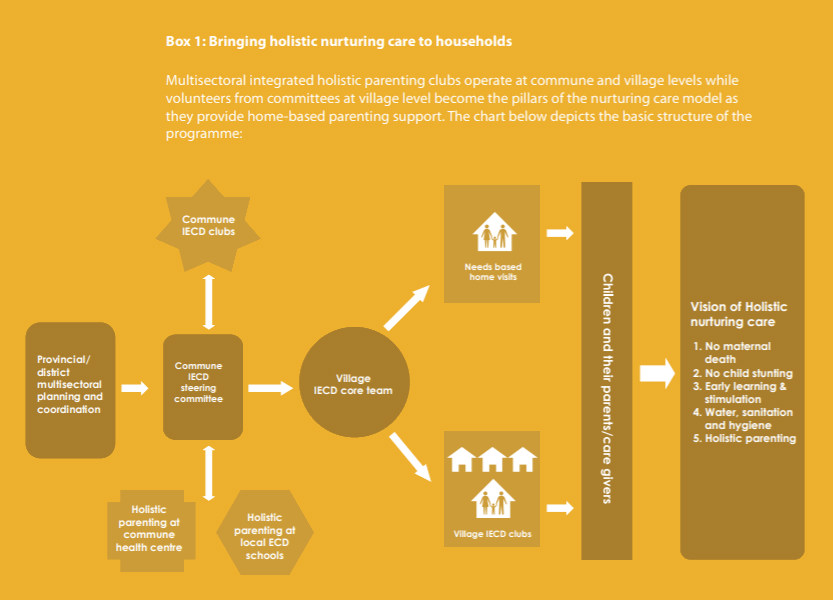 A community-based, interactive electronic tracking system (MIECD), will aid in the collection of real-time data on household indicators (including those for tracking water, sanitation and hygiene, child protection, and early stimulation/education), thereby providing support for decision-making, planning and advanced data analysis. Volunteers will send coded data via SMS. MIECD will form a strategic extension of the government’s health information system, beyond the commune domain. With high mobile phone coverage in Viet Nam, this will reduce some of the geographical barriers to vulnerable ethnic minorities in remote and isolated areas.

Early lessons learned include the vital importance of involving government and child development stakeholders from the beginning. This increases the chances of sustainability beyond the funding cycles of international donors and technical agencies, and makes the scaling-up of the programme more likely. Building high-level strategic partnerships, in this case with the Viet Nam National Assembly, served to increase the programme’s visibility and fostered commitments to young children. Establishing an implementation framework at the sub-national level also helped provinces to identify the key stakeholders at the local level.

Following the launching and planning workshops, all is set for establishing parenting clubs in participating villages and communes, with clearly stipulated roles and responsibilities for each committee member. A baseline assessment to determine current nurturing care practices in the model provinces will be undertaken, and parenting messages designed for the C4D campaign. The holistic parenting training package is being finalized, and an education course for trainers to be taught by internationally renowned master trainers is scheduled for June 2018. The first cohort of trainers will provide parenting support in three pilot provinces and be certified as holistic parenting facilitators. To support scale-up and sustainability in diverse local communities, commune health providers, preschool teachers and social work collaborators have been identified as potential facilitators of the parenting programme. In the second phase, starting in October 2018, certified facilitators and trainers from the original cohort will train additional facilitators, each of whom will deliver five parenting programmes per year in rural and remote areas for a total of 2,500 parenting groups and up to 30,000 parents. 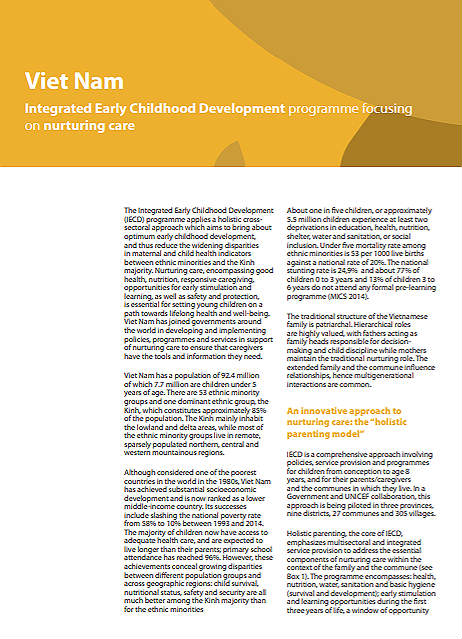